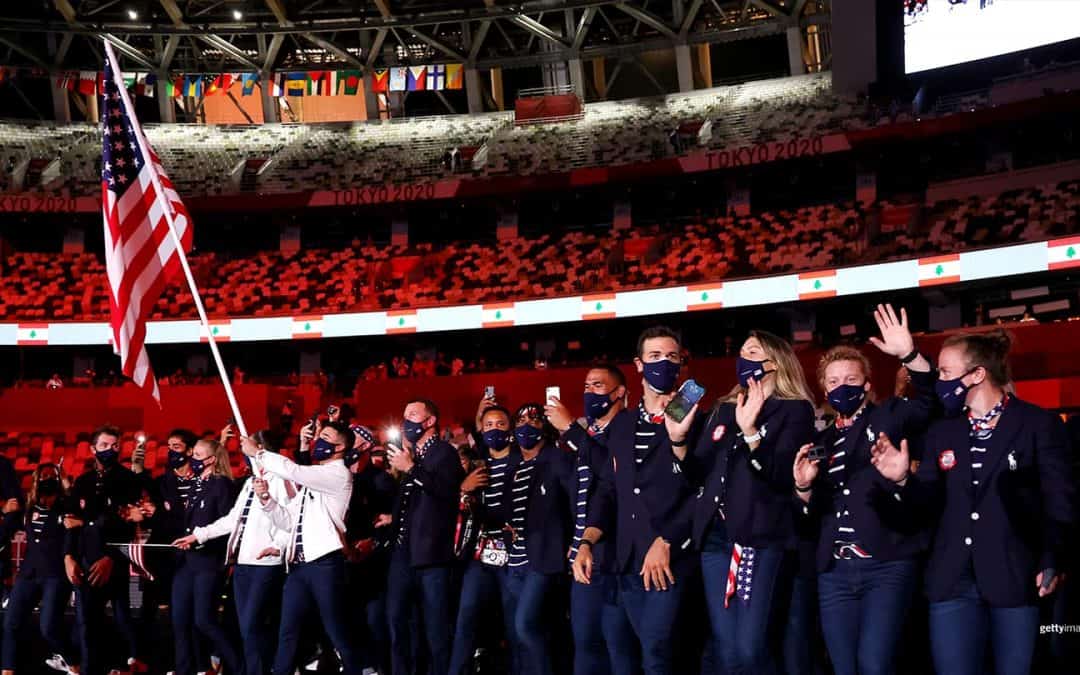 Team USA is ready to go for the Tokyo Olympics, even after beginning a year late. The Games of the XXXII Olympiad will began on Friday, July 23 with the Opening Ceremony and will end with the Closing Ceremony on Sunday, August 8, 2021, in Tokyo, Japan. Of the 613 athletes on Team USA, 19 of them are U.S. Military Soldier Athletes.

The opening ceremonies  were held and “although there are 613 athletes in the American delegation, only an estimated 200-plus marched in outfits designed by Ralph Lauren since many have not yet arrived due to COVID-19 restrictions.” It’s unclear how many of the 19 soldier athletes were in attendance.

“It’s a big honor to be a part of this, especially with our team being all Soldier-Athletes. It’s great to represent Team USA and the U.S. Army at this stage.” said Sgt. 1st. Class Dennis Bowsher, a Modern Pentathlon Coach.

Earlier this year, Marine Corps Staff Sgt. John Stefanowicz defeated the country’s top rated 87-kilogram Greco-Roman wrestler to earn a spot in this year’s games. “Being able to represent the USA on an international level while being in the Marine Corps is the highest honor that I have ever felt. It is something that is almost indescribable. I have finally accomplished this mission that has had an insurmountable amount of adversity, that has required years and decades of perseverance,” he said.

“This could not be possible without the support I have had from my team and coach,” Stefanowicz said. “The struggles that we have had to overcome as a team have made us all stronger, and in particular, coach Jason Loukides has helped transform me into the person and Marine that I am today.”

Coast Guard Lt. Nikole “Nikki” Barnes will compete in the Women’s 470-class sailboat category. “I fell in love with the Coast Guard. I am always on the water and the allure of creating a safer environment for fellow boaters was a big intrigue for me. As I have been in the Coast Guard, I have seen even more how this is a tremendous organization of people working hard to make a safer maritime environment,” she said.

Army Sgt. 1st Class Elizabeth Marks will compete in Paralympic swimming’s 50-meter freestyle, 50-meter butterfly, 200-meter individual medley and 100-meter backstroke. In 2016, in Rio de Janeiro, Brazil, she won a gold medal in the Paralympic Games in the 100-meter breaststroke and a bronze in the 100 meter medley. Marks enlisted in the Army in 2008 as a combat medic. She was injured while serving in Iraq and was sent to Brooke Army Medical Center in Texas for recovery. It was there, she said, that she fell in love with swimming, which was used as a form of therapy.

Like most of the soldier-athletes going to the Olympics, Marks is a member of the Army’s World Class Athlete Program, a program which enables soldiers with athletic potential to receive professional coaching, while keeping current with Army military occupational specialty and training requirements. Although Marks said she trained hard to compete and to win, “none of it would have been possible without my brothers and sisters in the military believing in me and pushing me to do so.”

Mango, Bowsher, and Jennings will be coaching wrestling, modern pentathlon, and taekwondo, respectively, at the 2020 Summer Olympic Games in Tokyo, Japan, July 23-Aug. 8.

“This is a tremendous honor; it could be a once-in-a-lifetime opportunity,” said Mango, who will coach on the Team USA wrestling delegation.

Mango, a two-time Olympian, will be coaching WCAP wrestlers who qualified for the games, Sgt. Ildar Hafizov and Spc. Alejandro Sancho. “It is an awesome opportunity to help them on their journey to becoming Olympic medalists,” said Mango.

Bowsher, a 2012 Olympian and 2016 assistant Olympic coach for modern pentathlon, will be the head coach for the sport this year.

“It is a big honor to be a part of this, especially with our team being all Soldier-athletes,” said Bowsher, an 11-time World Team member. “It is great to represent Team USA and the U.S. Army at this stage.”

Bowsher will be coaching both Team USA athletes, who are also WCAP Soldiers, Sgt. Samantha Schultz and Sgt. Amro Elgeziry.

Jennings, an Olympic medalist, is one of two coaches for taekwondo. Jennings will be coaching Paige McPherson, an athlete he has competed and trained with since 2012.

To watch your favorite soldier athletes you can live stream the competitions online and watch them on TV. The Tokyo 2020 Olympics will air across NBC, USA, CNBC, NBCSN, Olympic Channel: Home of Team USA and GOLF Channel as well as Peacock, NBCOlympics.com and the NBC Sports app. Click here for more info as well as how to watch the Olympics, live stream and more. Plus, check out the full Tokyo Olympics schedule here.