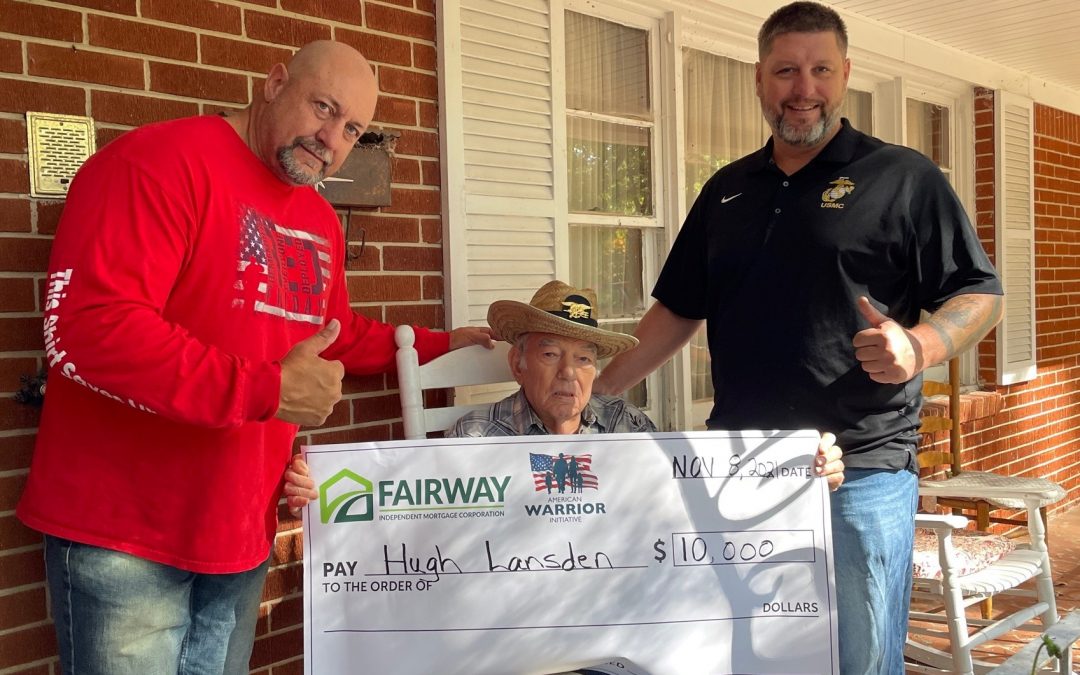 Navy Veteran Hugh Lansden, of Virginia Beach, VA is 95-years-old and received a huge surprise this week. As a Navy Veteran, Lansden was honored by the American Warrior Initiative (AWI) for Veterans Day Week, and was surprised with the funds for a new roof.

A few weeks ago, Lansden, called Ty Haughn with Hydro Proof Roofing to come out and look at his roof. The roof was damaged and should have been replaced about six years ago.

“My son had talked to some people who had put a roof on for him. I liked what I heard and I had three different outfits that came out and talked,” Lansden said to 10 Wavy News. “But I wasn’t completely happy with it. But I was happy with him before I ever met him.”

Haughn from the roofing company decided that although Lansden had put a 50% deposit down, he wanted to help give back to this Veteran.

“I felt like when I met him, I was talking to my grandfather. It’s an opportunity to give back to someone who’s given so much. If everyone could just do a little something in giving back and being kinder, it’s just a good thing,” Haughn said when speaking to 10 Wavy News.

This Monday, Haughn returned to visit Lansden with a $10,000 check to use for home repairs, as well as a free roof. Haughn says friends and others in the community helped raise money to cover the roof.

“It’s absolutely again the pleasure of my life to give back to someone like this. He spent 22 years in the Navy. He is one of the founding members of the UDT SEAL teams. His generation were the predecessors to the Navy SEALs. It’s such a great honor to be a veteran and give back to a man who served the country and spent many, many, moons away from home while his wife raised the family,” he said when speaking to Wavy News.

In addition to Haughn friends, the AWI helped make this a possibility. “We are a nonprofit with Fairway [Independent] Mortgage Company. All the employees pay out of their paycheck,” said Faron Burcker, speaking to 10 Wavy News. “The main objective is to go around and help Veterans in need. It could be Veterans suffering from PTSD with service dogs. It could be today, like the veteran who needs a roof to put on a house. That’s our way of paying it back to the veterans. That’s our way of giving something back to the community for everything they’ve done for us.”

“Being able to help in this way means a lot to Veterans and it makes our team proud to be apart of Fairway,” said Ethan Wilson, co-founder of team VA the Fairway.

Burker continued while speaking to Wavy 10 News that “I can’t even express how good it makes you feel. To see the expression on their face, the joy it brings them, and the fact they’ve done so much and haven’t really done much in return, to give them something back, it brings so much joy,” he said.

Landsens new roof should be finished by the end of next Monday. In response Lansden said, “This is one of the greatest days of my life.”